India's Untold Genocide of the Nagas

Since I am about to leave Nagaland, it's time to write about the largely untold war and genocide that has defined this region since the British arrived in 1832. While Mike and I are staying in the most peaceful region of Nagaland at perhaps the most peaceful moment in its history, the past is present. Underneath the surface of a proud and forward-thinking people are wounds that will take generations to heal. 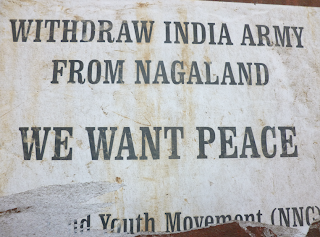 Timelines help me to make sense of the various waves of British colonizers, missionaries, Indian Government advances and attacks, and various Naga independence movements that have fought over this remote area in Eastern India. Since there is so little information out there on the Naga people, I felt it was important to get this out there—and I hope it may serve as a launching pad for those who study or travel to this area in the future.

Timeline of the Naga People
Please note that this is a rudimentary timeline constructed from two major sources—A Pilgrimage to the Nagas by Milada Ganguli and Between David and Goliath by Frans Welman. Both books are excellent sources on the Naga history and the more recent politics of the Naga fight for independence from India.

Pre- 1832 –             Naga warriors from the Angami, Ao, Rengma, Konyak, Zeliang, Lotha, Chakhesang, Yimchungru, Chang, Dimasa, Garo, Phom, Sema, Khiamniungan, Kuki, Lotha, Pochury, Sangtam, and Sumi tribes live in their traditional ways, mostly isolated from outside influence. (Note: the Ao’s who were more accessible via the plains of Assam traded more regularly with the Hindu kingdoms of Assam.)  The Naga's world was small, but also rich with customs. They held gennas, festivals to promote the growing season and celebrate their warrior prowess. They carved ornate wood sculptures, wove shawls and clothing (that slightly resemble some of the works of the indigenous communities I have come to know in Peru, Mexico and Guatemala). They hollowed out larger tree trunks to make large drums that they used to communicate from far distances. They domesticated a native bison called the Mithun. They made rice beer, smoked tobacco and sometimes opium. They sang and danced. And of course, they head hunted. 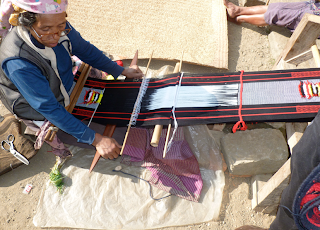 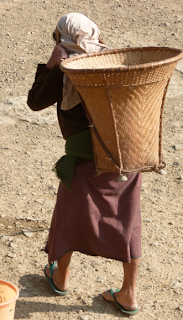 1832 –             First British Military officers attempt to raid Angami villages in the southern part of today’s Nagaland (near where Mike and I have been staying.) This begins 50 years of warfare between British soldiers and Naga villages. During this time, thousands of Nagas died defending their lands and their ways of life.

1839 –             US Baptist Missionary Reverend Miles Bronson attempts to convert the Nagas in the northern part of Nagaland.

1876  -             US Baptist Missionary Rev. Clark from Boston establishes first Christian town among the Ao tribe in a place called Molungyimsen in northwestern Nagaland.

1878 –             British forces take city of Kohima in southern Nagaland. This British India victory was significant and marked the first solid takeover of about 1/3 of what is today’s Nagaland. As a result of the fierce defense by Naga warriors, the British Indian soldiers left the other 2/3 of Nagaland as a free Naga frontier territory. Even within the 1/3 that British India controlled, Naga’s maintained separate village councils, which still function today. Also at this time, the British penalized acts of Naga head hunters by burning down the perpetrators' villages and tendering extreme fines.

1929 –             The Naga Club (one of the first unified organizations across Naga tribes) sent a formal memorandum to the British Commission stating that they would not join India when the British departed. (This request was later ignored.) 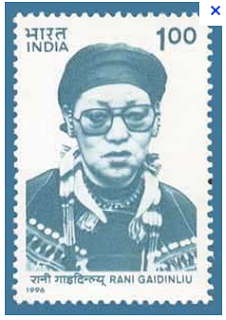 1929 -              A famous female Naga freedom fighter, Rani Gaidinliu, emerges from the Rengma tribe in Zelialong area of what is today the hills of Manipur. She went on to be jailed by the British for 14 years before returning to her village, where she continued small-scale efforts to maintain the traditions of her people and maintain independence from the British.

1944 -      The famous Battle of Kohima in WWII is fought beween the British and Japanese. British win while Japanese claim Burma.

1948 –             The new Indian government begins raids of Naga villages in what is now Manipur, south of present day Nagaland. These raids continue for the next decade. NNC elders are hunted down and killed. The Indian government attempts to legitimize their genocide of the Nagas by identifying them as dangerous insurgents.

1958 –             The Indian government passes the Armed Forces Special Powers Act, which gives them the right to “shoot to kill” on mere suspicion of “insurgency.”  The Indian army, Assam Rifles, goes on to kill over 100,000 Nagas, rounding them up into 59 concentration camps. 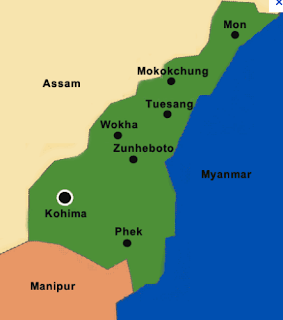 1966 -             Through peace talk negotiations, Mrs. Indira Ghandi offers a Bhutan-like independence for the Naga people, but the NNC rejects the offer. Peace talks break off. The Indian government begins an active campaign to eliminate Christianity and force the Naga people to accept Hinduism. Christian Nagas are denied education and armed occupancy by the Indian army returns to Nagaland.

1972 -                        International boundary between Myanmar and India is formed. The border goes directly through some Naga villages (including one family’s home.) The killing of the Naga people by the Indian government and among the various Naga insurgency groups continues.

1980            -             The National Socialist Council of Nagalim (NSCN) is Formed in resistance to the NNC. Infighting continues among the Naga political groups as does the presence of the Indian military.

1997 -    Peace talks begin again. The Indian government realizes that armed occupancy will not solve their problem with the Naga people. Peace talks take place over the coming years in Amsterdam and in New York. 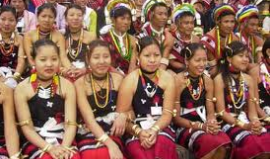 2000 -                Nagaland state hosts the first annual Hornbill Festival in Kohima in an effort to highlight the traditional festivals, traditions, dress and art forms of the 16 major Naga tribes. The festival is held in early December and continues today.

Present-            Infighting and active combat by the Indian army (Assam Rifles) continues, particularly in areas of northern Manipur, outside of Nagaland. Naga political groups continue to push for independence and a continuation of recently stalled peace talks. Here's a recent article that sheds light on the constant conflict in Manipur.  Honestly, it would take months and months of study to write 500 solid words on the more than five Naga resistance movements currently active.

Will the Naga people ever unite? Will they ever gain independence from the Indian Government?
In our time in Kohima, Mike and I have been in the most peaceful area of Nagaland. Here many Nagas have benefited from the ceasefire with the Indian government and have even grown wealthy off of the Indian governments significant financial investments in the state. While the Indian Government pumps millions into the state of Nagaland, Nagas do not pay taxes to the central government. Instead, we are told that it is common for Nagas to pay off various Naga insurgency groups as a way to maintain peace.

The Indian government’s control through the purse strings and massive infrastructure investments in the development of a relatively undeveloped state seems to maintain enough peace and tranquility that a Naga fight for independence seems elusive right now. As one Naga shared with me, “the fruit is not yet ripe to pick Naga independence right now.”

On the other hand, hundreds of thousands of Nagas have not seen the benefits of India’s financial investments in the state. Likewise, their memories of murder and mass destruction of their villages and family members are too raw, and too recent to ever imagine accepting the status quo.
For more information on the Naga struggle, check out the books I mention above, as well as this website of the Naga International Support Center. http://www.nagalim.nl/
Posted by Ali Jost at 10:21 PM